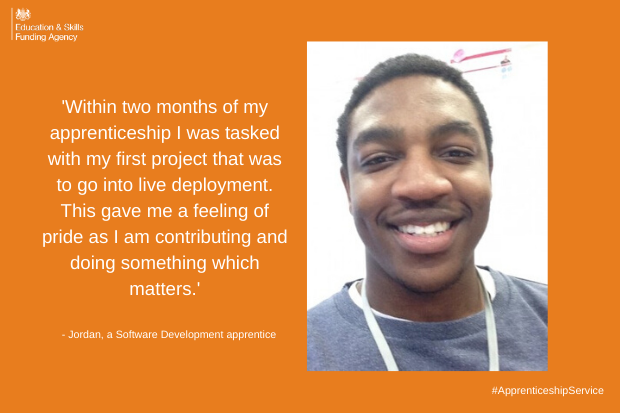 As part of National Apprenticeship Week, SFA Digital apprentices, a former apprentice and an apprentice manager will be blogging about their experiences. Today, we hear from Jordan, a Software Development apprentice who joined the team in September last year.

I got interested in development when I built my first computer. I used an operating software (Linux) that required quite a lot of command line executions to perform tasks. I also did Computing at college, and created small programs at home in my spare time.

I wanted to work in software development, and planned to go to university to study computer science or software development. After researching my opportunities post-graduation and the requirements of the job market, I decided an apprenticeship was the best route to establish my career.

An apprenticeship would give me workplace experience alongside the training, whereas university is primarily lecturing with the hopes of a worthwhile industry placement.

Within two months I was working on my first live project

I am thoroughly enjoying my apprenticeship, and it is surpassing my expectations. So far it has been fast-paced and hands on. Within two months of my apprenticeship I was tasked with my first project that was to go into live deployment. This gave me a feeling of pride as I am contributing and doing something which matters. Fortunately, everyone I have met, and especially the team I am in, are very forthcoming with advice and guidance where needed.

Looking back, despite only being an apprentice for a few months I can already see how I have progressed. Not only have I increased my knowledge in development but I also feel more confident as a professional within the workplace.

Planning for the future

One thing I have learnt while working within the SFA is how many teams are involved in the production of a digital product. As all the projects within the SFA are agile or transitioning into agile, and there are a lot of dependencies for each team. As part of my apprenticeship, I’m rotating around different teams. So far I’ve worked with a development team and a project support team and I’m currently working with a testing team.

Being an apprentice within the SFA is a key stepping stone towards my future as a software developer and young professional. It’s helped me form a clear idea of what I want my career path to look like.